If you can't stand the (Miami) Heat, you're unhappy with the NBA right now 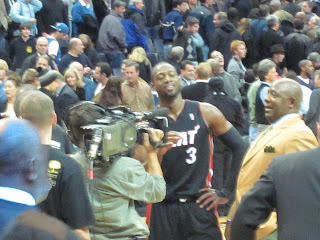 If you can't stand the Heat, you're not loving the NBA right now.

The Heat went into Los Angeles and whipped up on the Lakers.  Merry Christmas Lakers fans!  You got a lump of coal.  Actually, you got hit with a bag of coal (i.e. grifters' style).  Ouch.  As someone who was rooting for the Lakers and raced to find a TV upon returning from the Chicago Bulls v New York Knicks' game, I was ready for the marquee match-up that the NBA and anyone that loves basketball was expecting.  Even Mike Tyson tweeted asking simply, "Lakers or Heat?".  ****  I may have transposed his tweet, but it doesn't matter.

The Los Angeles Lakers lost last night to the San Antonio Spurs.  I'm not that surprised since the Spurs were home, and they're playing tough ~ but I am surprised that while the Heat are scorching, the Lakers are stumbling.  To me it looks as though the Lakers need a swift kick to wake up...  Maybe it's Phil Jackson's strategy to pull a Doc Rivers' and have his team "chill" during the regular season and then dig down deep in the playoffs.  I don't know...

It's a long season, and I want to believe that the Heat won't have an easy road to the NBA Finals, much less an NBA Championship.  As it looks right now, and granted we haven't hit the NBA All-Star break just yet ~ Heat fans can almost bank on another championship ring...

If it's not LeBron scoring it's Dwyane Wade...  ****  I'll admit again, that I am a Dwyane Wade, Pat Riley, and Erik Spoelstra fan.  Don't worry, I'm not jumping on the Miami Heat bandwagon.  I'm just admitting that it's impossible to ignore them and look the other way anymore.  This isn't a problem for me, because I just sit in the stands or watch the games on TV.  This is a problem for the players who go against them night after night and choose to watch the show as opposed to compete.

My friend went to the Knicks v Heat game last night in Miami.  In one word he described Wade's 40 point performance, "AMAZING."  My friend doesn't play for the Knicks, but I wonder if the Knicks had the same reaction...  Man, I hope not.

Come on: Lakers, Spurs, Knicks, Mavericks, Jazz, Celtics, etc.  I realize that the Heat are like crazy Glenn Close in Fatal Attraction ~ they will not be ignored, but...  It ain't over, til it's over guys.  It's a long season...  COMPETE!!!