ESPN 30 for 30: Winning Time: Reggie Miller vs the Knicks ~ Watch it 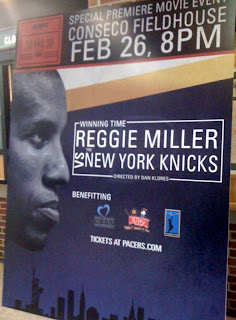 ****  I saw this poster when I was in Indianapolis for the Baltimore Ravens v Indianapolis Colts AFC Wildcard game, November 16, 2009.  Before the Colts game, I went with a friend to watch the New Orleans Hornets play the Indiana Pacers.  We only stayed at Conseco Fieldhouse for a short time (i.e. because of the football game).  I never knew I'd need this picture, until tonight.

I was never a Reggie Miller fan, but boy did my all into supporting Patrick Ewing and the New York Knicks.  "He's never going to win it for you," was what my dad would say about Patrick Ewing and the Knicks.  Man, til this day I can hear my dad's voice saying that sentence.  He was right, but that's not the point of this post.

Originally a Lakers fan, my happiness during the NBA playoffs lived and died with the Knicks in the mid 80s-90s...  ****  Ever since Georgetown lost to Villanova in 1985, I was a Ewing fan.  When Ewing went to the Knicks, I (i.e. my heart and part of my NBA loyalty) went to the Knicks.

As I watched the 30 for 30 episode, I laughed to myself.  The relationship between Cheryl and Reggie Miller remind me of me and my brother.  As an older sister my brother and I would always compete.  I think the fact that we're similar in age forced us to be assertive and put a fire in both of us to succeed.  As I watched, I started to chuckle and sent my brother a text.  It said, "Watching ESPN 30 for 30.  Cheryl and Reggie Miller remind me of you and me.  Is it tough to live in my shadow? Hahaha.  Just kidding!" Needless to say, my brother has yet to reply.

As I watched the episode, so many memories came flooding back.  If you show me a score of 58-70, with the Pacers losing to the Knicks, I know what happens.  Reggie is going to start launching 3s.  ****  As I continued to watch clips of Reggie draining 3s, I started to feel sick.

All the footage from the Knicks and Pacers battles on the court, reminded me of the physicality that used to be part of the game.  How could Rik Smits not be considered soft in those days with warriors on the floor that weren't afraid to make contact on their way to the hole?!?  I'm not going to lie.  Admittedly, watching all the contact, jersey pulling, head butts, etc. has me fired up right now.

Next thing you knew Reggie Miller was fouled and made both of his free throw.  The Pacers won Game 1 of the Eastern Conference Semis with a score of 107-105.  GAME OVER.  "John Starks choked," was the quote I heard from Reggie.  To be honest, he was right.  I was never a fan of John Starks either.  He was way too streaky for me.

Knicks found themselves down 3-1 in the series, but would win Game 5 (i.e. thanks to Ewing and the refs for not calling traveling).  and Game 6.  Game 7 would be at Madison Square Garden, and the winner would face Orlando for the Eastern Conference Finals.

With 5 seconds left.  The Knicks were down 95-97.  Everyone knew the ball was going to Ewing.  Ron Harper inbounded the ball to Ewing.  Ewing turned at the top of the key (i.e. everyone including the big man expected contact).  Instead of going strong to the hoops and even dunking, Ewing laid the ball up and the ball RIMMED OUT...  Ewing went down with his ship, and immediately my heart sank.  ARE YOU KIDDING ME?!?!  I called my dad who was "watching the game with me", to talk it over.  I was so shocked and inconsolable.  Like I said earlier, my dad always told (i.e. and continues to tell) it to me "straight".  He never believed Ewing would win the title with the Knicks.

Ultimately, the Pacers defeated the Knicks at the Game 7 at the Garden, but it wasn't the Conference Final.  Both the Pacers have yet to win a NBA Championship (i.e. since 1973).  If Ewing couldn't win it all, at least Reggie didn't win one either...

"8 points in 9 seconds,"  wow ~ that phrase still excites and nauseates me.  Absolutely AMAZING.  Here's a clip of the play(s) that I found on Youtube.

**** Do me a favor, if you liked this post or any other of the posts in this blog, please go to the upper right hand corner of this blog and vote for me for Blogger of the Year. It only takes a second. Thanks!