Duke defeats Butler in the rematch, and I meet Bill Cowher 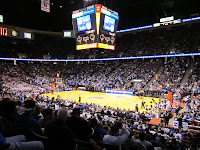 I left Ohio this morning and flew into Philadelphia.  I did that because I needed to be close(r) to New Jersey since I had a ticket for the Duke v Butler 2010 NCAA Championship rematch.
The line for the game was Duke -14.5 if anyone is curious (i.e. and from the conversations overheard at the Izod Center by the men around me, people cared). 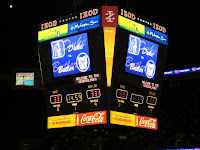 I didn't expect this game to be a close one.  However with Kyle Singler getting into early foul trouble and Duke shooting ice, ice cold the game was a lot closer than more Blue Devil fans wanted.
Incidentally, I was surprised to see a fairly sizable Butler University contingency.  ****  FYI.  I've seen some of Butler's campus in Indianapolis. and it's beautiful.
Both teams were tied at 33 at half-time. 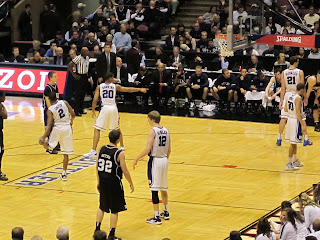 With Butler's Gordon Hayward gone (i.e. he matriculated to the NBA), I figured Brad Stevens would have his hands full.  I was right.  As mentioned before, Duke's Kyle Singler ran into foul trouble but towards the stretch in the 2nd half, Duke its rhythm and started to drain shots.  Ultimately, Singler would foul out.  However, the Blue Devils were able to ride Nolan Smith's 24 points and Kyrie Irving's 21 points (i.e. 17 of which that came when it mattered in the 2nd half). 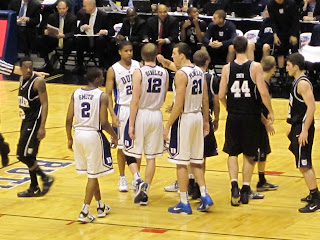 I'm not going to pretend that this game was more interesting than the game I missed (i.e. UNC's upset of Kentucky), but it was a fun game to watch for any Duke fan. 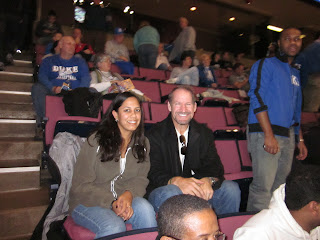 In addition, it just so happened that I looked across the aisle and you'll never believe who was sitting a couple of rows behind me.  It was former Pittsburgh Steelers' coach, Bill Cowher.  The rumor is that his daughter is dating Ryan Kelly.  I guess that makes Coach Cowher a Duke fan.  EXCELLENT!

****  FYI.  I never forget a face.  If you're a sports person, actor, singer, performer, politician etc. and you're in the building, I will recognize you.  I am always looking around, and I'm just good like that at picking people out of a crowd.  Trust me.  The list of random "celebrities" that I've run into or had sitting next to or near me at events is outright strange (i.e. Oprah, Tom Cruise, and countless others). 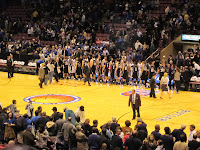