Saturday morning I left NYC and took the train to Atlantic City (http://www.acestrain.com/) for the Jay-Z concert.  This was my first time on the train from NY Penn Station to Atlantic City (i.e. quick stop in Newark, but I think it was only due to scheduled maintenance).  The fare was only $29.  You can't beat the price.  The ride is was about 3 hours, but I slept most of the way.

When you do open your eyes, you have views like the following from the train: 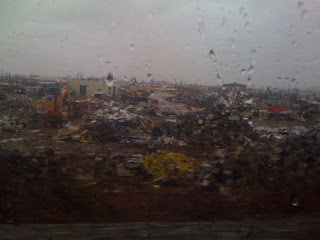 Trash, but seriously...  Who cares about the view?  I just needed to get to AC.
Close to 12:30 PM the train arrived at the AC train station (i.e. which appears to be connected to the Convention Center and is located near the Sheraton).  From the station you can hop on the jitney and for $2.25, it will take you to your destination.  I was meeting a couple of friends in AC, and they were driving from DC.  They started their voyage earlier than me, and had beaten me to AC by 10 mins or else I would've asked them to pick me up.

The main reason I headed to AC was to see Jay-Z, at the Borgata.  I like the Borgata and had a reservation there, but my friends offered to let me crash with them at Caesars so I cancelled my hotel room. I like casino comps.  This wasn't a clubbing type trip ~ this was mainly business (i.e. there to gamble).  My friends like to gamble, and we all were "in it to win it".  Plus, I knew I'd have my chance to sing and dance at the concert, so it wasn't that serious for me to be in the thick of it all at the Borgata's clubs (e.g. Mixx or mur.mur).

As soon as I arrived at the hotel, I dropped off my bags and headed to the casino floor with one of my friends.  Together, we went to the Pai gow poker tables to check on another friend.  After everyone was present and accounted for, it was time for me to start making money.  I have no idea why, but I started with $20 at a penny slot machine.  Even when you win, you lose because who really "tries" to win "pennies"?  I could throw 200 pennies into a fountain and have more fun.  Hmmm ~ maybe I'll go to a mall tomorrow and make 200 wishes... 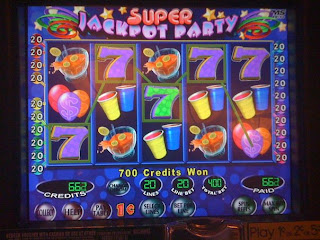 Winning 200 pennies is LAME
Next, my friend and I headed to the roulette machine, and I dropped another $20.  I asked my friend, "Are you having fun yet? Because I'm having a blast..."  Yep, I was starting to get sour.  I don't like machines and all the "games" that have no human interaction.  As far as I'm concerned those things are developed and programmed by sadistic, computer/math nerds that don't want anyone to win.  It's just a hunch.  What do I know?
I played some other game and dropped $100.  I had so much fun losing that hundred, that I couldn't tell you what game I had played (i.e. sarcasm).
My friend suggested we go eat.  I thought to myself, "Yeah.  Food.  Eating is cheap".  So we went to some lounge restaurant and ordered a pizza.  While trying to wake up (i.e. I was still tired from staying up late the night before trying to finish my Big East posting) and watching conference tourney games on TV, I knew that the inevitable was about to happen.  I was going to have to go to the ATM.  It takes money to make money, and I only had $121 left in my wallet (i.e. after scalping the ticket the night before to the game and squandering it on 2 machines and a table game).  My friend bought lunch, and I walked with my head down to the ATM.
Sooooo, I'm standing in front of the ATM, and I realize that I have no idea what my daily limit is on my account.  I try to pull $600.  ****Ok, if you're reading this, you should know that I'm NOT a high stakes casino player.  I have always been a money hoarder.  Ask anyone in my family.  I went for that amount because I have another trip coming up, and I wanted to pull enough to make the ATM fee "worth it".  I tried for $600, and I was denied.  Obviously, $600 is over my daily limit.  Next I tried for $500.  Yep, you guessed it.  Evidently, my bank had decided that I was not pulling that much out of my account either.  Denied AGAIN.  At that point, I was positive that the guy behind me thought I was a lunatic and/or poor and wanted me to get out of line.  Whatever.  He was going to have to wait.  As they say, the 3rd time was the charm, and I successfully withdrew $400 out of my account.  EUREKA ~ finally I had money!!!
My friends started playing Pai gow poker, and I headed to Rapid Roulette.  I turned $100 into about $350 in about 15 minutes.  It's called "Rapid" for a reason.  For those of you that have no idea, what I'm talking about, here's a quick summary.  Rapid Roulette has about 12 stations and each person has his/her own screen where he/she can place bets (i.e. the minimum bet is usually less than the actual tables).  Then beauty of the game, is that a HUMAN spins.  Like I said earlier, I don't mind automation and technology, but appreciate the variability of human interaction.
I went back to the lounge area where my friends are and show them my chips.  I'd decided that maybe one of my friends is a cooler.  I said maybe.  I'm not sure.  Regardless, I told him he was not allowed to gamble for a while until I got my groove back.
At the craps table, things start moving and sure enough, I started to make some more money. My dad taught me craps. It was a bonding experience for us when I was younger. We'd go to the Bahamas, and I'd always approach him at the craps table when I was bored/hungry. He's funny when he's at the craps table because there are times when he doesn't want anyone near him. To get me to leave the table he'd always give me chips out of his rack to go "cash at the cage". This is good work, if you can get it.
When I was younger, it worked like this. I'd get bored and look at my dad's chips. If he didn't have many, I'd wait to approach him later. If he had a bunch, I'd go over. Timing is everything. Sure enough, within about 10 minutes, I'd have a handful of chips to cash. Once I got the cash I'd run back from the cage and hand the money to my dad. My dad likes hundreds (i.e. like father, like daughter).  If I brought him $687, I'd get $87. If I brought him $493, I collected $93. You get the point. I'd make about 10 runs a weekend. So, here's the story. One year my brother and I were with my dad on the way to Windsor from Detroit. Dad asked both of us how much money we had on us, so he could borrow it. He hates ATM fees too. My brother informed my dad that he had about $40. I reported that I had $1,300. When my brother heard this is head spun around he started yelling "foul". My response was to tell him to go to the Bahamas, because it's lucrative and fun. ****Told you I was a money hoarder.

Before you knew it, it was almost 5PM, and I'd planned on going over to the Borgata by 7 to get into the Event Center.  ****My ticket for the concert was a Standing Room Only/General Admission one because I wanted to be able to be up by the stage.  I prefer to play craps when I have a schedule, because it forces me to have to walk away at some point.  It keeps me disciplined.  I left the table, got ready, and went back down to the casino to see my friends, who decided that they might head over to the Borgata later.

At the Borgata it was a mad house, but in a good way.  People were everywhere and you could feel the energy.   It's a great hotel.  I went straight to the event center and had no problem getting in (i.e. doors opened at 7).  I found a great spot a few people away from the stage.  Jay-Z is interesting in that he has both men and women who want to be up close to the stage.  ****Earlier in the week, I sold the other concert ticket that I had for $300 (i.e. not too shabby, since face value was about $150).

Trey Songz came out and did his thing.  Jay-Z's ETA started at 10 minutes (i.e. at other shows, it started at 20 minutes).  The seats in the risers didn't look full for the sold out show, which led me to believe that people who had actual seats decided to join the rest of us on the floor.

Jay-Z did his set, and it was better than the show in DC.  Why?  Because Jeezy wasn't there.  A fun surprise was that Stevie Wonder was in the crowd, by the stage, taking in the show.  You know you're doing something well, if Stevie comes out to see you! 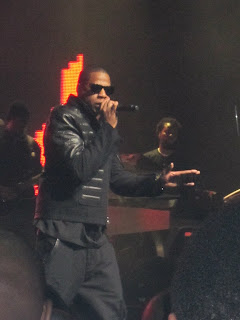 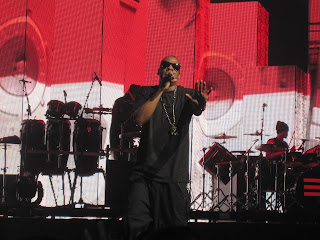 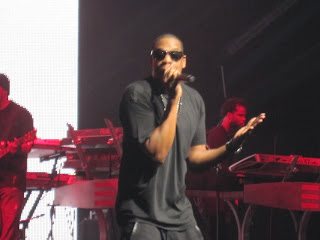 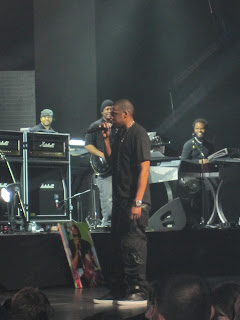 After the show, the cab line was ridiculous, so I went to the craps table to kill time.  The lowest table minimum was $15 and after 3 shooters who made a point and then proceeded to crap out after setting another point, I was "over it" and decided to head back to Caesar's.  I played until about 3AM (i.e. 4AM with the time change).  I kept trying to get to $1500, but luck wouldn't let me.  $1200 is where I topped out (i.e. including my $400 withdrawal).  C'est la vie...  It's good to be in the black (i.e. I made my money back, covered my NYC expenses, and have some extra play money).

I can't believe I forgot to mention Manny Pacquiao.  Along with most of the casino staff, my friend and I watched the Pacquiao v Clottey fight on the TVs (i.e. along with everyone working on the casino floor).  We all stood around the TVs and gaming practically stopped.  The fight went 12 rounds, and Pacquiao threw 1200 punches.  Manny won every round by a score of 10-9.  Yeah, Manny!!!  Now, can we please have a Pacquiao v Mayweather fight?!?! 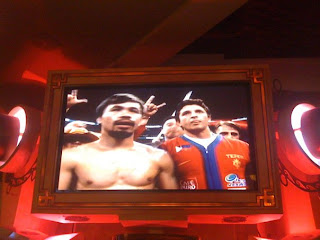