Raptors defeat the Timberwolves, and my trip to the Target Center

Monday night I went to the Target Center to watch the Toronto Raptors take on the Minnesota Timberwolves.  I also crossed off my 60th venue in my goal to hit all the professional stadiums for baseball, basketball, football (and I guess I'm also including hockey).  I knew the game wasn't going to be a barn burner, but I had to go to the arena and check it out for myself.

I knew ahead of time that this arena was older.  I also knew that, years ago, this is the arena where a ceiling light fell and almost hit Zydrunas Ilgauskas.  How do I know?  He told me.  Needless to say, I kept looking up to make sure everything was all good.

The Target Center is an older arena conveniently located right downtown in Minneapolis.  When I walked into the building, the first thing I noticed was a statue of "Mr. Basketball" George Mikan.  For those of you that don't know who George Mikan is, you really should go out and buy a basketball almanac.  He is a legend.  I met him years ago, when he was in Cleveland for the NBA All-Star game.  I'm pretty sure I have his autograph somewhere on something, and I'm even more confident that the item is gone.  Oh well. 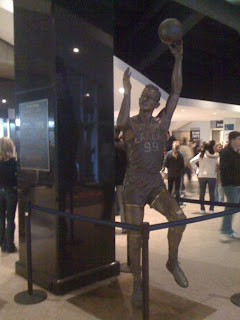 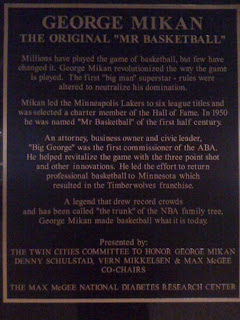 My seat was 10 rows off the court in front of the Timberwolves' bench, and immediately I looked towards the rafters to see what was up there. 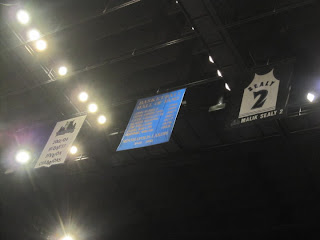 Malik Sealy's jersey is retired...
Until now, I could not understand why Malik Sealy's jerey was hanging up there.  I just googled and read his Wikipedia page, and now I understand.  Malik Sealy was the victim of a drunk driving accident.  He played his entire career in Minnesota and according to his Wiki, was leaving Kevin Garnett's birthday party when struck by a pickup truck traveling the wrong way down the highway.   http://en.wikipedia.org/wiki/Malik_Sealy
On a lighter note, the center banner boasts the Minneapolis Lakers' Basketball Hall of Fame.
The game started, and I noticed that it was really quiet in the arena.  Really quiet.  It reminded me of  Gund Arena before LeBron came on the scene, and Gund Arena (i.e. before LeBron came on the scene) reminded me at times of a library.  ****Incidentally, it reminded me of one of the girlfriends of a former Cleveland Cav, since she could often be seen reading a book, in her seat while her man "played" the game.  Talk about rude and embarrassing.   I'm all for promoting literacy, but that can be done in the family lounge or at home if you're that disinterested in the game. 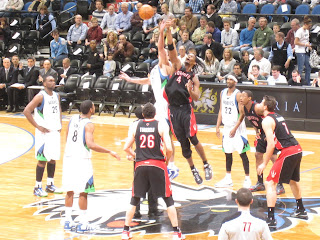 The opening tip...
The game was a slow one so I had plenty of time to look around and take it all in.  I had the Timberwolves' bench in front of me and I studied it.  First I noticed Kurt Rambis sans goggles and then scolded myself for not remembering that he was the head coach.  Then I noticed Bill Laimbeer was there also.  Obviously he no longer holds the post as of head coach for the WNBA's Detroit Shock.  Is it just me or does it seem like an "unholy union" to have Rambis sitting next to Laimbeer?  Do Lakes and Pistons get along?  Well, technically they're weren't next to each other since Reggie Theus was sitting in between them.  Talk about some great basketball playing talent ~ Rambis, Laimbeer, and Theus...  Oh, one more thing ~ the Timberwolves' coached need to spread their seats out.  They looked too crammed together.  Ever share the backseat of a car with 3 or more other people, where every other person has to lean forward when the others lean back?  This is what the Timberwolves' bench reminded me of... 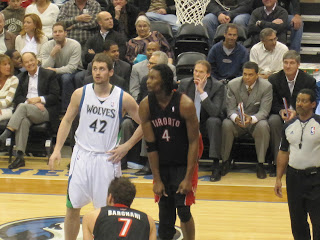 Kevin Love and Chris Bosh waiting on a rebound, w/Rambis, Theus, and Laimbeer looking on
It's almost like a mentorship program for the young Timberwolves'.  I looked at the players and noticed how young they are.  I think that explains their record.  Kevin Love had a decent contingency from UCLA in the arena, to the point where I thought there was a legitimate student section and I was at a college basketball tournament game. 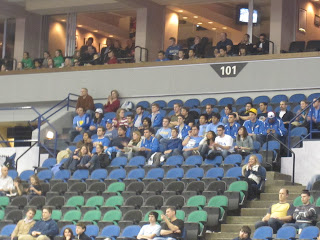 UCLA "student" section
Ok. now this is going to seem mean, but I can't not say anything about it.  The camera man for the Timberwolves must have been in a bad car accident.  He was wearing a neck brace and had an eye patch.  Talk about dedication to his job, because there he was doing his job. 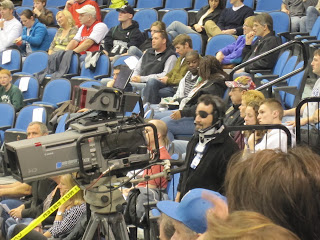 Dedicated to his job
During the game, I noticed that Marc Iavaroni was sitting on the bench for the Toronto Raptors.  I remember him from his days in Cleveland where he served as the Big Man coach.  It's always great to see a familiar face.
During one of the timeouts, the Timberwolves had a promotion where they threw T-shirts into the crowd.  Have you ever seen a referee throw a t-shirt into the crowd?  I never had until this game.  Maybe I've never really paid attention, but I always seen the refs talk amongst themselves during these timeouts ~ however, at this game I noticed one ref scanning the crowd for where to throw the T-shirt.  Weird. 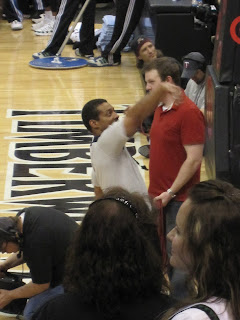 Who wants a shirt? 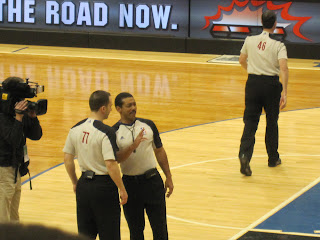 Seriously?!?!  Is this ref from Minnesota?  Weird.
Anyway, nothing much to report about the game itself.  It was a slow one, but the Raptors came back to win by 6 points (i.e. Jack was fouled with very little time left in the game).  The betting line was -4.5.  Just saying.
The Target Center has vendors that sell snowcones and beer will run you $6.75.  I had Twizzlers and a Pepsi while I chatted it up with the guy sitting next to me, who happened to be Ramon Session's cousin. 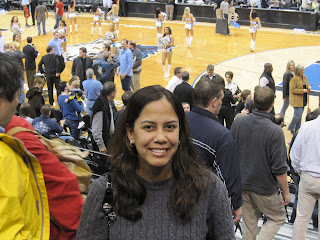 Cross the Target Center off the list
That's all I have for now.
THE WIRK
Posted by THE WIRK at 12:20 AM