The San Jose Sharks defeat the Minnesota Wild, and I hit the Xcel Energy Center

Tuesday night I went to the Xcel Energy Center to check out the San Jose Sharks v the Minnesota Wild.  I wore a green sweater to work, so I was practically already dressed to support the Wild ~ BUT I was there to root for the Sharks (i.e. and check out another venue, #61 to be exact).

I talked to the hotel concierge and found out that St. Paul is about 15/20 mins away from Minneapolis.  He also informed me that scalping is legal here.  Bingo!  I threw my boots on and hopped in a cab.  20 mins later, I stepped out of the cab, found a scalper and he was more than willing to split a pair of tickets. He had tickets 4 rows off the ice, located more or less "center ice".  Face value on the ticket was $80+.  I paid $60 and waltzed into the arena. 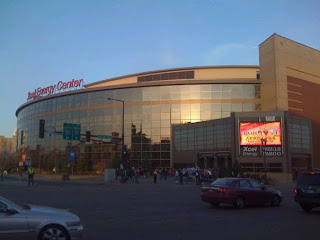 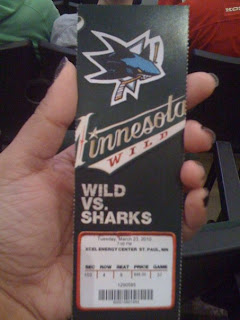 Why not root for the Wild?  I have no loyalty towards Minnesota.  Actually, I really don't have any allegiance to the Sharks either.  However, I do remember meeting George Gund III at the Cleveland Cavaliers' holiday party many, many years ago and I recall that he held a minority interest in the team, until 2002.  I like the Gunds.  They are Cleveland natives.  Further, it didn't hurt that I checked the standings before I left the hotel and the San Jose Sharks have been on a 5 game losing streak, so it was "time" for them to win.  I like rooting for winners.
When I arrived at the arena, I ran to my seat.  I noticed the Sausage Haus and mini-donuts were for sale.  No time for that though ~  I wanted to be in my seat for the opening face-off.  My seat was excellent. 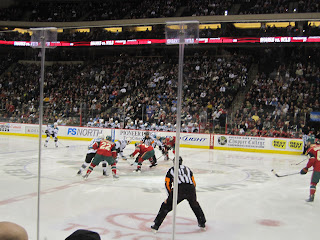 Opening faceoff
The Minnesota Wild are out of the playoff hunt, but they drew a crowd of 18K+ .  There was much more energy at the Xcel Energy Center (i.e. no pun intended) compared to the Target Center.  However, towards the end of the game, it appeared that the crowd began to turn on their home team as one of the guys sitting near me started referring to them as the Minnesota "Mild".
This was a very aggressive game and lucky for me, I was sitting close to the ice and near the penalty box.  The Sharks won this game easily, with a score of 4-1.  There's really nothing left to say.  The Sharks were clearly the better team.
Enjoy the pictures. 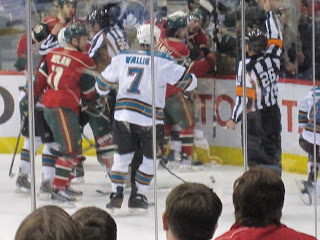 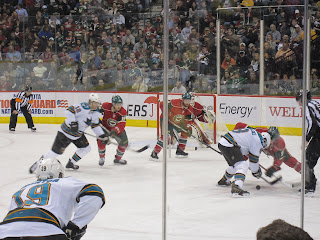 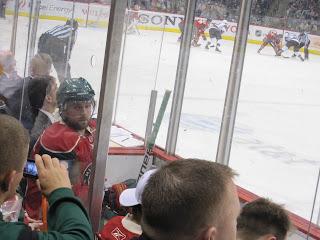 I actually think he's posing for this picture 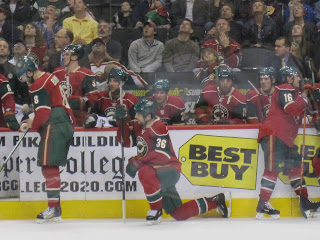 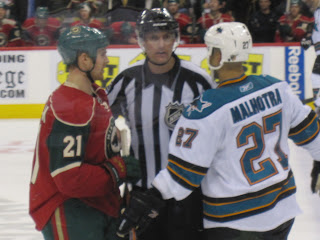 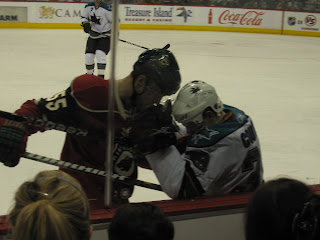 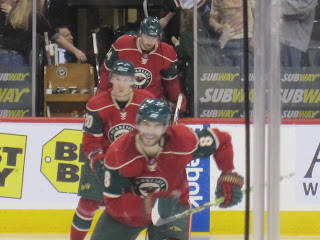 The Wild skating towards me 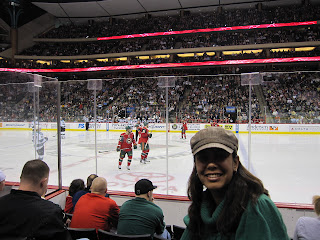 With the guys on the ice 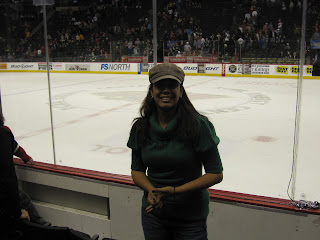 Check off another venue
I only need to hit the new Minnesota Twins' stadium and my sports tour of this city will be over.
Incidentally, Darth Vader was at the game and riding on the Zamboni.  I think he was also posing for pics with some Storm Troopers on the concourse.  There's some sort of show that will be performing songs from the movie at the arena at a future date.  My one regret of this night, is that I did not seek out Darth for a picture.  Oh well ~ I'm not worried about it.  With my luck, I'll run into him again.  Further, there was a contest during one of the breaks in the game and 1 male and 1 female were competing to identify the Star Wars characters' pictures that appeared on the big screen.  Now I don't know where these people came from or what rock they've been living under, but who can't identify an Ewok, C3PO and R2D2?!?!  Answer:  the 1 male and 1 female who agreed to participate in the game.  It was unbelievable.
Oh - one last thing...  Can anyone get me into Paisley Park?!?!  If so, leave me a comment...  :-P
THE WIRK
Posted by THE WIRK at 1:37 AM