Conference tourneys aren't the end all, but they are important

I was watching Around the Horn today, and I must disagree with some of the sentiment regarding the conference tournaments importance.  I listened to a few of the viewpoints and I have to say, I don't agree.  I think the Conference tournaments are important.  Are they extremely important?  Will I become ill and be forced to miss work so I can watch?  NO to both questions.  However, I will tune in and watch a few of the games in various conferences (i.e. that pique my curiosity), and I will definitely check the scores.  Why?  Because now is the time for people to dial in and start getting a sense as to who's peaking and who's fizzling.

I don't have to remind you that it's almost time for us to start completing our brackets, do I?  In a world of where everyone and their mother decides that they want their shot at the money in the bracket pool, people have to make intelligent decisions.  Sure there are the people that pick based on mascot, location, alma mater, seeds, coaches etc.  Another factor that needs to be considered is the strength of the conference.  I don't see anything distinctive or unique in many of the conferences that makes me want to take note.  Yes, it's no secret I think that the ACC is weak.  Further, even though I'm from the Midwest, I can't seem to get interested in the Big 10.  The SEC isn't my cup of tea, as all of the teams seems to blend in my brain.  Plus, I've already been there and done that when "Big Baby" Davis was playing for LSU, and it took me days to get the song, "Eye of the Tiger" out of my head.  What?  You like that song.  Well, I did also ~ UNTIL, I heard it a bajillion times played by school band in the span of only a few days.

If you're a diehard fan of a team, I recommend you go to your team's conference tourney.  Do it once.  It's an experience.  I'm a Duke fan, and I remember when the ACC tournament was at the Verizon Center.  Duke beat GA Tech and won the ACC tourney that year.  I went to almost every session of that tournament. 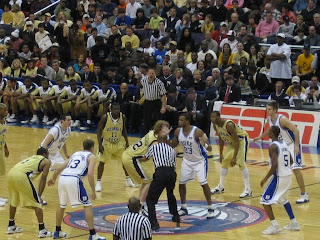 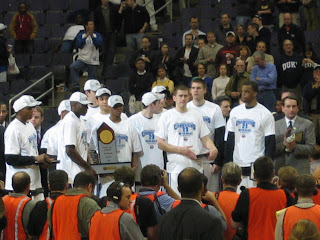 Duke, 2005 ACC Tournament Champs
As each team wins and loses, it's fun to see how the dynamic and team colors of the fans around the arena change.  If you're not a major booster of your alma mater or favorite team (e.g. Iron Duke), don't worry about tickets.  You can still get into the game.  As teams lose, their fans go home.  Most of the fans that are making a quick departure out of town, have ticket books for the remaining sessions and chances are they'll sell them to you for $100-200 to cut their losses and try to get some cash back (i.e. maybe for gas money and to cushion the blow of the loss).  Wait outside the arena and hold your finger in the air with how many tickets you need and chances are you'll be able to strike a deal.

Perhaps you're already in the arena, and have a upper level seats (YUCK, EWWWWW, GROSS) and in between games.  If you're not creepy, you can politely approach someone who's on his/her way out the door and ask for his/her ticket.  BE NICE!  The person's team just lost.  Chances are you can upgrade to a lower level ticket.

Alright - enough about the ticket hustle.  I can't give away all my secrets. 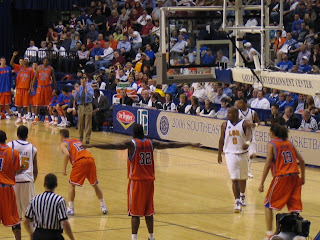 Florida's Joakim Noah and LSU's "Big Baby" Davis together on the court, 2006 SEC Tourney
This year though, the Big East is more interesting.  Yes, the Big East is strong.  Yes, we all expect many teams from the conference to get into the brackets.  It's not a secret.  However, for this fan, who has yet to watch basketball be played at the Garden (i.e. I've only been there once and it was to see the NY Rangers play the Pittsburgh Penguins), this is the year I choose to check out the action.

Below is the Big East tourney schedule (and my quick 2 cents on the games already played):

I plan to be at the Garden on Friday night to take in the semifinals.  I would love to see 2 quality games.  I want to see more Big East action up close and personal.  I want to see the physicality of the players and see how Big East fans get down in one of the most famous, storied basketball venues.

Being from Ohio ~ with any luck, maybe the Dayton Flyers will continue to win and play in the A-10 Conference tourney in Atlantic City on Saturday, March 13.  If time is on my side, perhaps I can take in the A-10 action Semifinal Round Doubleheader, which starts at 1PM.  My only concern is that I have the Jay-Z concert later that night, and I need to make sure I'm in good position for a quality location by the stage...  That's right.  I have to keep it moving...


"It's the eye of the tiger, it's the cream of the fight.  Risin' up to the challenge of our rival".  LOL.  I couldn't resist and now I bet it's stuck in YOUR head :-P