Ok - I'm a little "sported" out, so some quick basketball bullets and then a quick write-up about an intellectual sport ~ trivia...

Yesterday I went to trivia.  Moral of the story.  Go with your gut.  There was a question about the shortest Bible verse and the question was about for "whom Jesus wept".  For some reason, the name "Lazarus" came to mind.  Sure enough, that was the correct answer.  Random.

We went into the fnal round (i.e. 1 point away from the lead) and the category was "Michelangelo".  The only work that came to mind was "La Pieta", since I'd seen the piece while I was at the Vatican in October 2009. 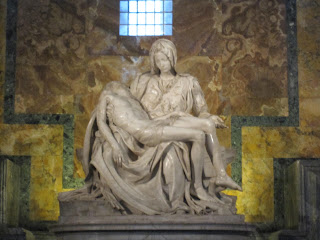 Here's the picture I snapped of La Pieta, when I was at St. Peter's Basilica in Vatican City.

I was joking with my teammate to write it down as the answer, before the question was even read.  Well, the question was something about the only work that Michelango signed ~ and sure enough, the answer WAS "La Pieta".  Unfortunately our team answered the Sistine Chapel...  Oh well...  I could've sworn that no one signs statues.  Do you see Michelangelo's autograph? I don't...

Don't forget to get your LeBron #23 jersey, while you can :-P