Jay-Z's at the Verizon Center ~ Clap for 'Em

Sports don't interest me right now, so I'm doing music for this post and since Jay-Z's show is tonight at the phone booth, here goes...

I love Jay-Z.  Back in the day, most people had to pick between Nas and Jay-Z...  I never picked.  For me, it was no contest.  For me, Nas was never even in the game.  I went to Rock the Bells concert/festval in the Bay Area in August 2008.  It was a last minute decision, since I was attending meetings in Dallas 2 days before the show.  I already had a flight booked back to VA and wasn't going to change it.  I flew home, did laundry and hopped a flight the following day to SFO.  ****My friend, Ricky, teases me that I have a magic chest of frequent flier miles...  He's not too far off-base.  I do have the abilty to be very flexible with my schedule and airline choices, since I have miles just about everywhere.  Anyway, I went to SFO for the DAY to see what Rock the Bells was all about and catch up with an old friend, the Insideplaya.

At the Rock the Bells show acts such as De La Soul, Method Man and Redman, Mos Def, ATribe Called Quest, and Nas performed.  Ok - so let's put this into context.  I'm from a suburb in the Midwest.  What does that "mean". To translate, I'm trying to tell you that if the song was on my radio, it was "mainstream".  For example, I grew up on De La Soul's "Me, Myself, and I" but hadn't heard "Buddy" until the day of the show in the Yay Area.  My music readers that are hip to the scene, understand what I mean.  The rest of you, should go ask somebody...  Don't be ashamed.  I had to explain it to my brother...

I had a great hook-up for the show, thanks to my friend and we sat and debated Nas and Jay in between acts and prior to Nas' performance on stage.  I admitted that I wasn't a huge Nas fan.  I wasn't and am still not very familiar with his catalog.  His latest work at that time, had put him at the top of the charts (i.e. I think my memory serves me right) ~ I didn't really know enough about his music to comment.  I was in the audience "judging" for the most part on what I was seeing.  Nas came out and did a good show, but he didn't captivate me like other acts I've witnessed.  I found myself looking around at the audience and waiting for Tribe...  Have you ever seen acts like Eminem or Jay-Z?  I don't take my eyes off of them.  They have "it"...  That quality/presence/charisma/energy that makes your eyes follow them on the stage.  They don't need dancers, a crazy light show, or a gimmick.  They come out on stage and they fully invest themselves in their audience.

Nas is a talent.  The people have voted based on their spending power and he's a power house.  However, for this girl ~ he's no competition for Jay.  Actually now that I just looked at my iTunes library, I notice that I have 11 Nas tracks and of them, I really only recognize 2 of them by the titles... Yeah, I admit it. I still don't really know Nas's music, but at least I can check him off the list of people I should see in concert  ****To my readers who are going to text/email/call me sales figures for Nas v Jay ~ please don't.  I don't care if Nas outsold Jay one year etc.  This isn't that kind of posting.  . 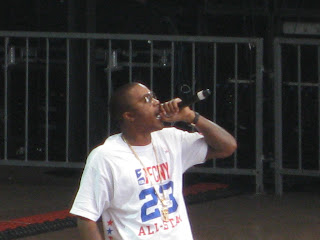 Nas @ Rock the Bells, Aug 2008 ~ He made me look...
Like I wrote, I'm more familiar with Jay.  I can pick Jay out of a crowd easily.  I like Jay's music more.  I'm believe Jay is more versatile, has better range.  If I went to party and had to choose between sitting next to Kelis or Beyonce, I'm sitting next to Beyonce ~ so Jay wins there also.  Perception is reality, and I perceive Jay to be more likable than Nas.  I'm not about to research both of their backgrounds, childhoods, favorite sports teams, etc.  for this post ~ but if I had to pick teams like they we all did back in school ~ I'm telling you right now, I'm picking Jay.

I'm not sure how many times I've seen Jay-Z in concert.  If I had to guess, I'm going to guess 4 times, but that number actually seems low.  I've seen him in large arenas, smaller venues, and chilling in a cabana at the opening of Tao Beach in Vegas (i.e. incidentally Diddy was in the neighboring cabana).  I've seen most if not all of his major tours and for some tours I've caught multiple shows.  It's a good time. 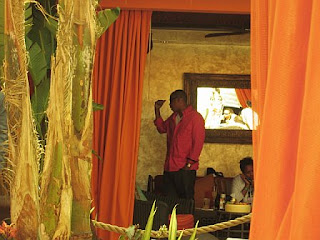 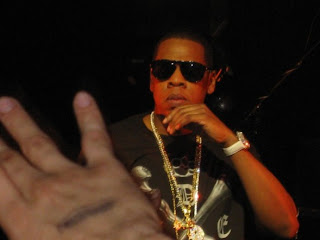 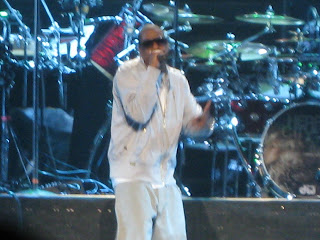 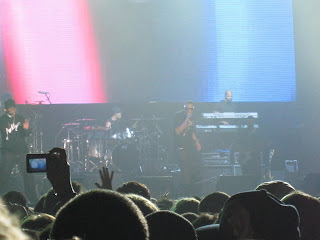 Blueprint 3 Tour@ Alexandra Palace, UK ~ Nov 2009
Told you I was a fan of Jay-Z...  As many times as I'd seen him in the US, I was very impressed with the turn-out and atmosphere of his show at Alexandra Palace in the UK.  I was fortunate enough to be working in London, and out to dinner with my friend Jennifer the night before the show.  She and I were indulging in Mexican food and margaritas, when she casually mentioned that she was going to see Jay-Z the following night.  ****Incidentally, she and I are both from the US and Mexican restaurants aren't easy to find in Central London. Anyway, to my chagrin she mentioned that she was going to the concert with her other friend, Sarah, and that she thought the show was sold out.  Needless to say the wheels in my brain were turning throughout the night, and the minute I returned to my hotel room I logged onto Ticketmaster and was thrilled when I was able to purchase my general admission ticket.  Perfect!  I was all set and didn't have to worry about hacing seats beng close to each other etc., since the entire concert was general admission except for about 12 "CHOICE" seats to the side of the hall.
I wish I'd taken more pictures of the venue.  I can't recall a concert in a place like that before.  The concert was held in the Great Hall.  If you're curious, check the link:  http://www.alexandrapalace.com/Floor_Plans.html. I'm not sure what capacity is for the venue, but I'm more than confident that capacity was reached or exceeded.  People were packed in tight, but for the most part were extremely pleasant and good natured considering how hot it became once the beats started bumping.  ****Oh, while I'm thinking about it, here's some advice:  Don't cut in front of people who are queueing in London.  The women across the pond seemed to be more aggressive when dealing with line jumpers, compared to the their counterparts in the US.  I saw it first-hand when people decided to try and take advantage of a gap in the line and slide in.  Trust me.  It's not worth the verbal abuse over there.  Even the New Yorkers I was with were surprised at the severity of the reaction.
Jay-Z performed his Blueprint 3 album and the crowd in the UK loved it.  That concert at Alexandra Palace will always be special to me ~ not because it was the best show I'd seen, nor did I have the best location to see Jay-Z perform, nor is it really that interesting to me that they filmed the concert portion footage of the "Young Forever" video there... That show will always be special because when he performed "Empire State of Mind", the crowd was so into the show and song that for a moment, the UK felt like the US and London was NYC.  No, I'm not from nor have I ever resided in NYC  It's a metaphor.  My point is that music can "transport" people and for that moment, this American who was working "across the pond" felt like she was "home".
Moral of the story ~ If you have the time and the money, I highly recommend you check Jay-Z's show out tonight.