2010 FIFA World Cup Predictions ~ Brazil to win it all? Agree or Disagree? With the USA eliminated from competition, I'll admit that I've tuned out of the World Cup.  If walking by a TV, with a match on, I'll stop and check the score ~ but I really have no idea anymore about who I want to win.
I received the following message today from my good friend, Kanak.  I found it funny that she even sent it, since she's not a sporty person.  To be honest, I nearly fell out of my seat when she texted me (i.e. during Game 7 of the Los Angeles Lakers v Boston Celtics series) that Sasha Vujacic needed to shave!  I couldn't believe the girl even had the TV on still, much less was watching and cared enough to read the names on the jerseys.  She said she checks into this blog ~ and now I believe her.

Further, being that she lived in Brasil/Brazil, she does have interest in soccer/futbol. So here are her 2 cents and predictions for the rest of the 2010 FIFA World Cup.

Here's what SHE wrote:

" Ok...Soooo I wanted to send my predictions to you.  I know you aren't that into soccer, but I am super EXCITED, and you are the only one that might half way care now that the US is out." 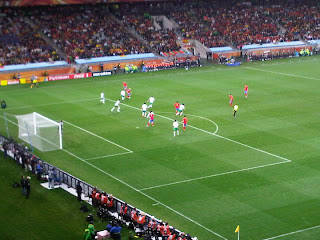