You say IZZO, but I say IZNO... They're not the Michigan Cavaliers...

According to Twitter, the Cavs Majority Owner Dan Gilbert and new GM Chris Grant will hold a press conference at 2:30 p.m. today. You can watch this press conference live on Cavs.com. It's no secret that Dan Gilbert is from Michigan, and that he wants Tom Izzo to coach the Cavs.  Tom Izzo has been the head coach of the Michigan State Spartans since 1995.  I've been an Ohioan all  my life (i.e. regardless where I reside).  Sooooooo, bringing Izzo to Cleveland (for me) is a HUGE faux pas, and NOT the answer to keeping LeBron in Cleveland.  Further, I honestly can't see how Izzo is going to bring a NBA Championship to Cleveland.

Yes, Izzo has been wildly successful as a collegiate coach.  According to Wikipedia, "Under Izzo, the Michigan State program has been one of the most successful in the country. Izzo has led the Spartans to the 2000 NCAA Division I National Championship, six Final Fours, and six Big Ten Championships in his first 15 years at Michigan State. The winningest coach in school history, Izzo's teams have been invited to the past 13 consecutive NCAA tournaments, in addition to setting the Big Ten record for the longest home winning streak."

Great.  That's fantastic.  However, anyone (i.e. who has love for the game) can tell you that success in the NCAA does not equate to future success in the NBA.  Must I remind everyone of Rick Pitino's stint as a Celtics coach and P.J. Carlesimo's stint as a Golden State Warriors head coach?!?!  I hope not, because I'm almost positive both men would want to forget those career moves. 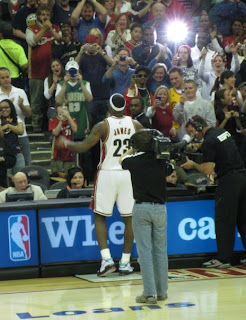 As a Cavs fan, I think it might be time to panic.  It doesn't take a genius to realize that this is a stressful time for the cit of Cleveland.  I was just in Cleveland on Friday, and I only saw one billboard/sign that could be inferred as a LeBron please stay sign.  I think that's good, because I liken LeBron's relationship with the city as a boyfriend and girlfriend type union.  Do you respect your partner when they beg you to stay when you say you need/want time?!?!  No, you don't.  I'm glad that Cleveland isn't begging.  OK, I must also confess that I think I read that Akron might be holding a "LeBron please stay day" ~ but they're not sure LeBron will show up.  Like I said, I'm no genius ~ but that sounds like a recipe for disaster.

With management, ownership, season ticket holders, and citizens waiting on LeBron's every sound and trying to read body language ~ if I were LeBron I'd buy one of those old school jackets that has every NBA team's patch and logo on it.  For a man who's being enabled by an entire country of basketball fans and has never been recruited, this is the time to go all out.  However, it'll all be for nothing, if he never wins a championship.

I'm an Ohio girl.  I don't like that the Cleveland Cavs are becoming the Michigan Cavs.  If I were a Cavs season ticket holder, I'd seriously consider listing my tickets NOW ~ to beat the rush (i.e. just in case) before the market gets flooded...  I really wish my team and the city of Cleveland "good luck", but ) I hate to admit that this ship might be sinking...