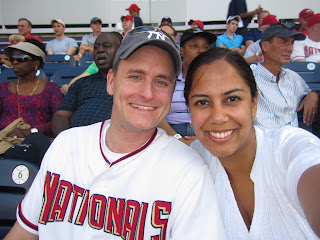 Yesterday I told my friend, that I'd take him out to dinner for his birthday.  However, later that day, I realized that Washington Nationals', phenom Stephen Strasburg, was pitching against the Chicago White Sox.  Change of plans...  So much for dinner, my friend and I were going to go to a baseball game! 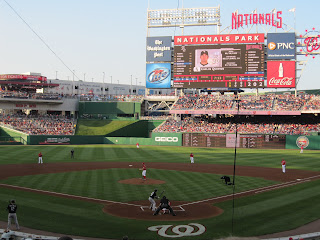 It was my 2nd trip to Nationals Park (i.e. this year) and DJ and I settled into our seats in the Diamond Club.  White Sox scored first and the score was 1-0 in the 1st inning.  We both love baseball so we started to look around the park, and then we noticed that there was a lot of activity in the suites.  Yep, turns out that President Obama was at the game also.  If you ask me, our seats were better ~ but of course, he needs to be shielded/protected and the suites offer him that. 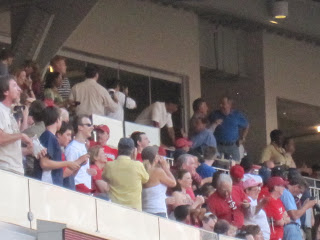 President Obama is at the game
With Strasburg on the mound, I wanted to sit behind home plate and see what it was like to have him throw "at me", and if you ask me the seats were a deal since each ticket came with $35 to spend at the game.  Plus, since the tickets weren't scanning properly, the lady in the Diamond Club gave us $70 in Nats Bucks!  Together, between the 2 of us, we had $140 to spend on food, drink, and merchandise.  Thanks for the free food and drink Washington Nationals and extra thanks for my new Stephen Strasburg jersey!

Can't make it to the game or need some gear for the next time you see Strasburg pitch?  Here's a link to his jersey so you can buy one also!

Here are some other pictures snapped during the game. 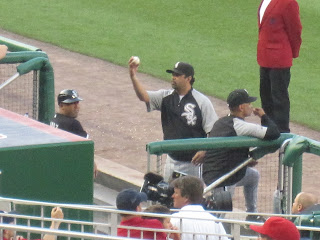 Joe West was the unpire, but Ozzie Guillen got to stay the entire game this time 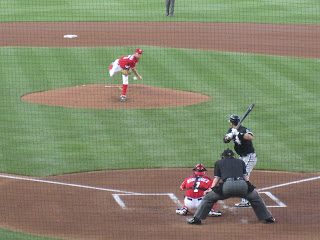 Stephen Strasburg on the mound 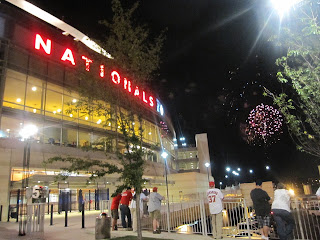 Fireworks after the game
It took extra innings, but the Chicago White Sox defeated the Washington Nationals, 2-1.
Looks like another great day for some baseball ~ take ME out to the ball game!
THE WIRK
Posted by THE WIRK at 1:02 PM