Game 3 is in the books.  The Los Angeles Lakers defeated the Boston Celtics 91-84, and Derek Fisher cried at the end of the game...  Yeah, I don't know either.  I saw that he scored 16 points, but seriously, what did I miss?!?!

Regardless, I could lie and tell you that I watched the entire game ~ but I didn't.  I was rooting for the Celtics and the 1st quarter looked promising.  I also saw the Celtics come back in the 4th.  What did I do in between that time?  I ate and jazzed up this blog...  Don't judge me!  We all make choices...

I also went through my email and looked for a picture that my friend, Ning, sent me from Boston.  Now that the Celtics are playing the Lakers, vendors in Boston are now selling Kobe Nope T-shirts.  Check it out. 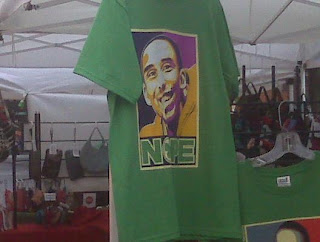 Kobe Bryant Nope T-shirt
Boston might need more than T-shirts to reign Kobe in.  Bryant ended the game with 29 points after shooting only, 10-29...  Definitely not a typical performance, but it was enough for the Lakers to eek out a road win.  Kevin Garnett came up strong with 25 points, but it didn't take a look at the box score to see how rough a game Ray Allen had.

Ray Allen only had 2 points tonight.  He went 0-13.  Don't believe me?  Check the box score.  Very tough night for the shooter.  Here's hoping he finds his groover and returns to form.  Shooters are by nature "streaky".  They're either on fire or ice cold. I wonder if Ray Allen could see his own breath tonight...