Game 6: Lakers dominate the Celtics and force a Game 7 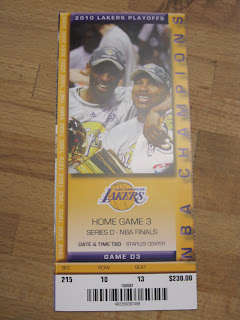 By now we all know that Game 6 of the Boston Celtics v Los Angeles Lakers series was a blow out.  Being that the Lakers had to win or go home, it was a HUGE game for Laker fans.  The ONLY place to be for a Laker fan with the means and a little bit of luck was the Staples Center!

I should've known that the Lakers were going to win when I was walking into the arena.  I am usually good luck.  Also, while walking into the building I heard the ESPN radio guys, say that Tom Izzo turned down the Cleveland Cavaliers job.  ****  Yep, you were right, Soup.  I should've listened to you, from the start!

Christina Aguilera sang the National Anthem before the game.  She watched most of the game with her husband in seats on the baseline. 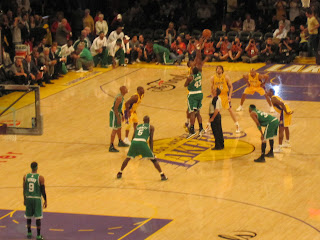 Opening Tip
I posted my pictures from the game 6 last night, and a friend pointed out today that the score with 1:55 left in the 4th Q, was the final score of the game.  NO buckets in the last 2 minutes of the game...  I guess, why even bother.  The Celtics had basically stopped competing and the number 59 seemed to live on the scoreboard for the longest time.  59 points.  If you would've told me that the Celtics would have scored only 59 points, "For the Longest Time" (i.e. now I have that Billy Joel song in my head), I would've told you that you were crazy. 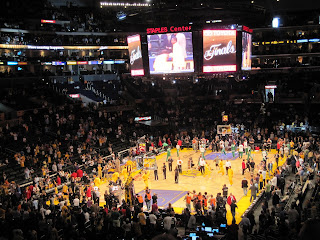 Kendrick Perkins' presence (i.e. or lack there of) was palpable.  He left the game in the 1st, with what I hear is a hyper-extended right knee.  I never really realized how much of an impact he made, until he was gone.  Great.  Now I have a song from the hair band, Cinderella, in my head.  If you want more information on the injury or want to see the video, check out Sekou Smith's Hang Time Blog.  According to everything I've read and heard, Perk isn't going to play in Game 7, Thursday night. 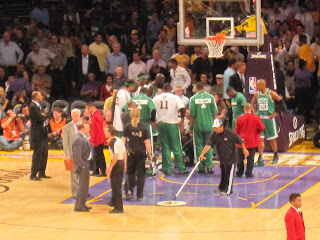 Celtics team checking on Kendrick Perkins who's on the court
At the end up the 1st Q, the Lakers were up 10 on the Celtics with a score of 28-18. 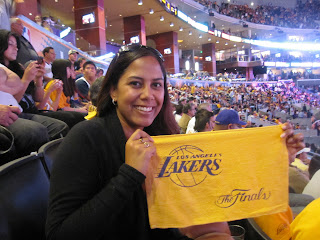 Don't get excited.  I have tons of rally towels for all sorts of teams...
As much as I'm not a Kobe Bryant fan, I have to admit he does put up excellent numbers.  Numbers don't lie.  He ended the game with 26 points, 11 boards, and 3 assists. 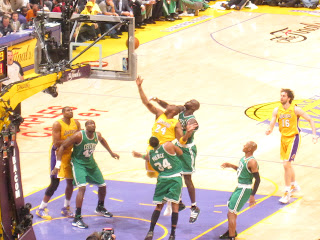 For you gamblers out there, here's some information.  I was just in Vegas and the spread on the game is Lakers -7.  If I remember correctly, the Money Line was Lakers -360 and Celtics +280.  I also checked covers.com earlier in the evening and the consensus was about 60% Celtics and 40% Lakers.  Just saying...

I was lucky enough to score a ticket at the last minute to Game 6.  I was on my way to the Staples Center and ended up parking in the Venice garage on/around 15th and Figueroa for $12.  The garage was just past the Convention Center.  Thank goodness I got there early, since the parking lots (i.e. that weren't already full at 4PM) were filling up quickly.

At the arena, I immediately texted my friends and gave them my coordinates, but I wasn't about to get up and chase people around.  I'd just finished my Mickey Mouse Scavenger Hunt, and I was exhausted.  I wanted the game to begin, and I was surrounded by a sea of Lakers fans.  That reminds me, I couldn't help but notice a Celtics fan who had a purse.  I swear it was on his shoulder.  Now I realize it's probably his wife's purse, but seriously?!?!  ****  Ladies, don't make your men carry your purse ~ it makes them look ridiculous.  If you love your man at all, carry it yourself.  The guy was getting ripped on by entire sections in the arena the entire game, and if you ask me he was asking for it.  It definitely wasn't the smartest move he could've made.

Game 7 is Thursday night at 9PM EST.  I won't be at the Staples Center, but I'll be watching.