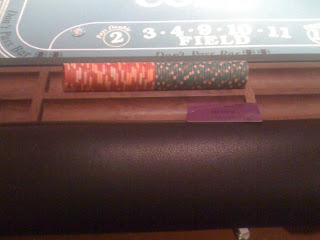 I had some time to kill...  I didn't know why I booked the flights I did and then it hit me.  I booked the itinerary since the plane connected in Las Vegas.  So what does one do with a 3 hour layover in Vegas?  I don't know what other people do, but I definitely had a plan.

Ok - I probably actually only had about 2 hours to get out of the airport, catch a cab, throw my bag at a bell stand, place a bet, chat with friends, hit the craps table, WIN BIG, cash out, get lunch, head back to the airport, clear security, and board my plane.

I went to my favorite place, the Venetian and checked the boards.  While I settled in and looked at the numbers I realized just how quiet it was in the place.  Oh well - better for me, so there were no lines and I could maneuver and do what I wanted to do efficiently.

I placed my bet for Game 7 for the Boston Celtics v Los Angeles Lakers game.  Who did I take?  Well, maybe I'll tell you and/or post a picture of the ticket after the game tomorrow night.

After chatting it up and catching up with my favorite dealers, I went to the craps table and cashed in $200.  There was only one craps table open and as usual, I was the only girl.

In about 20 minutes I had 3 shooters and the last shooter made me my money.  Since it was an off-peak time, the table minimum was $10.  I seem to win faster and better when I'm on a time crunch.  It's just something I noticed about myself.  Regardless, this outing was no different.  All of my come bets had may odds and were paying out and he also hit a hard 6.  Wouldn't you know I had $20 on "Scottie Pippen" and it paid 10X1.

Having to catch my flight, all my bets came down and it all worked according to "plan".  I looked around the table and I was impressed at how well I'd done in such little time compared to the oldies (i.e. but goodies) that surrounded me.  What can I say?  My dad taught me well! 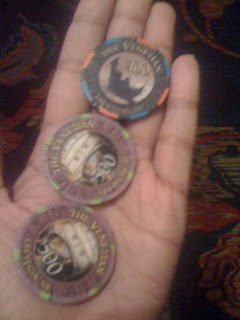