I saw a picture of a close family member at Wimbledon today, and I couldn't believe it.  Well, actually ~ I could believe it, but that's not the point.  I was jealous!  In addition to seeing him with a Wimbledon headband (i.e. think Bjorn Borg), he also sent me the following picture (i.e. "I've queued for the 2010 Championships").  To add insult to injury, this was not his first time there.  Anyway... 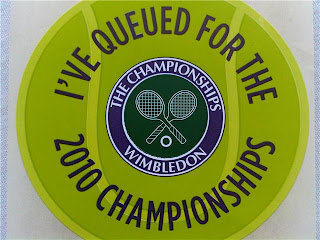 Today at The All England Lawn Tennis and Croquet Club, John Isner and Nicolas Mahut battled.  To say that it was a marathon, isn't doing it justice.  It was the 2nd day of their 1st round match.

Today, the players ended their outing tied.   Each had 2 sets each and the 59 games EACH in the fifth set.  Yes, you read it correctly, 59 (i.e. fifty-nine)!  Isner and Mahut had their play suspended after 7 hours, 6 minutes on court, due to darkness.

It doesn't surprise me that there's already a Wikipedia page for the match, since it's definitely one for the history books!  The Wikipedia page (i.e. at the time of the suspension for darkness on 23 June) has statistics for the match in process, but I did want to point out a couple of statistics.  Mahut has 95 aces, and Isner has 98 aces.  Further, Isner has had 4 match points, and Mahut has had 0.

Both players seemed unable to break each other's serve and I can't imagine the degree of fatigue each must feel.  I'm not sure how they're going to get out of bed tomorrow to play, but hopefully the match will conclude (i.e. FINGERS CROSSED) tomorrow.

Even though grass courts don't appear to be Isner's forte, I predict that he wins.

Speaking of Wimbledon, does anyone remember the 2008 Wimbledon final between Rafael Nadal and Roger Federer?  If you're a tennis fan, you know exactly what I'm talking about.  I was in Las Vegas and I bet on Federer.  I fell asleep and woke up to see that Nadal had the advantage.  It basically looked like Nadal had the match in hand, so I went back to sleep.  When I woke up AGAIN, Federer was coming back!  I had to watch the rest of the match at the Home Turf sports bar at the Las Vegas airport.  Thanks to Delta, I was able to easily bump myself off of my flight to watch the end of the match.  I lost, but Nadal won.  That match was amazing, and my first class seat on the way home helped ease my pain...