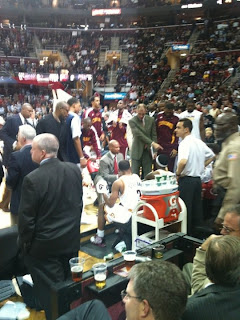 Right now the Cleveland Cavaliers are battling the visiting New Jersey Nets.  The Cavs are down 7 in the 4th with a little over 2 minutes left.  For those of us that know the NBA, it's GO TIME.
****  Photos are courtesy of Carm Olaes.

Once my former boss, Carm, texted me that he was at the Quicken Loans Arena watching the Cavs game, I requested some pictures.  I haven't been back to the arena yet, this year and wanted to "see" what I was missing.  It's great to see that there's a good sized crowd out supporting the Cavs!
Byron Scott has his work cut out for him this season, and it looks like his bench has been coming through for him so far.  If I remember correctly, I think I saw that Antawn Jamison is coming off the bench these days.  Well,  whatever works... 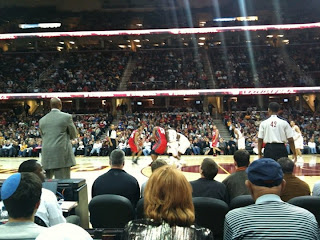 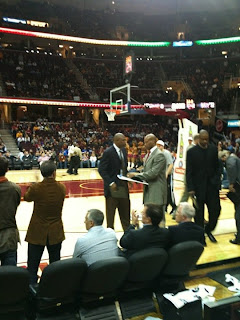 As I was typing this post, the Cavs ended up losing to the Nets with a score of 95-87.  The outcome might have been different had Mo Williams not left the game injured.  Let's hope, Mo returns to the line-up soon.  I'm not going to speculate as to his injury, since it seems as though the folks in Cleveland are confused.

I predict that the Cavs win at least 40 games this year.  Some of you might think that's optimistic, but what can I say...  I have to have faith, and I like the fact that the Cavs have a proven winner, Byron Scott, as their coach.