Yesterday I went to Atlantic City for the day.  I went up to make some money on the craps table and possibly go and see the fight between Sergio Martinez and Paul Williams at the Atlantic City Boardwalk Hall.  I wanted to go since it was "close to home" and it was a rematch.  Williams won the first fight, in what has been described as a "controversial decision".

I have never watched the first fight.  I was only concerned with the 2nd one. 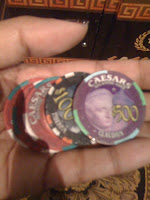 I was just in Dallas for the Margarito v Pacquiao fight, so I figured I might as well watch the middleweight championship rematch.  It didn't hurt that in less than 2hours I was already up $500, so why not throw some money at a fight ticket?!?! 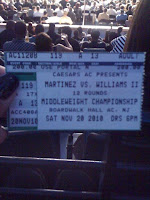 It might have taken longer to pick my seat then actually watch the fight.  If not, the pre-fight "hoorah" might have taken longer than the actual fight.  After taking and sorting through so many boxing pictures last week, I decided to put the camera down after the 1st round.  HUGE MISTAKE.  Sergio Martinez and Paul Williams was interesting in the 1st round with both fighters landing punches.  They were holding onto each other though, and I thought that was a little lame.
In the 2nd round, Martinez landed his left and KNOCKED OUT Williams.  Williams landed on the mat face first and I immediately grabbed my camera and started shooting.  Ask me how annoyed I am, that I don't have shots of Williams falling to the mat!?!?!  Ugh.  Mental note. NEVER put my camera down.
Here are my shots from the fight and a video of the activity in the ring after Williams hit the mat. 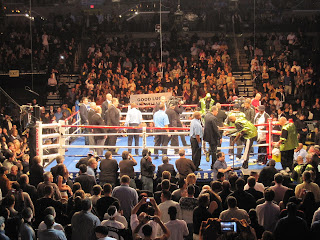 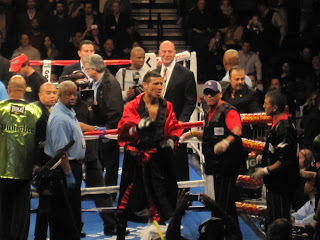 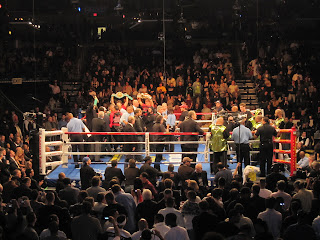 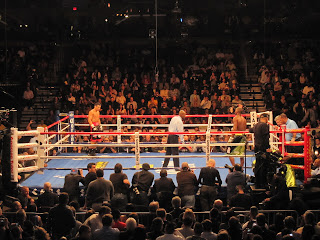 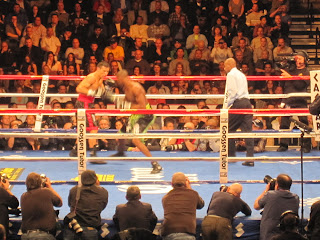 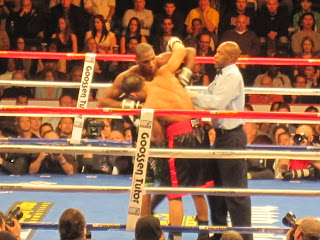 Tangled up and on the ropes 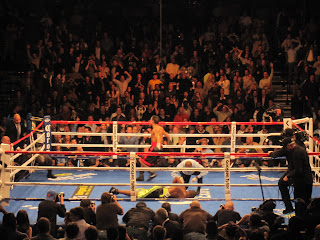 Martinez running around the ring after landing his knock out left,
Williams, who fell face first, is on the mat 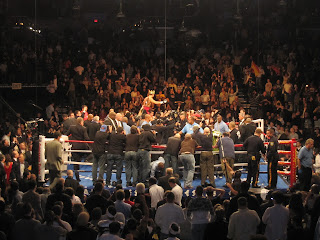 Sergio Martinez, wearing a crown, is lifted up
After the fight, it took a few minutes, but Williams was able to get up and do his post-fight interview.  When asked if he remembered what happened, he made some comment about not being able to remember.  Next thing you know the announcer showed him a "replay of what happened".  WOW.  Haha.  Talk about "too soon".  The man just picked himself up off of the mat, and he gets shown his knockout punch.  Funny.
People are saying that Martinez's left to Williams in the 2nd round, might be the knockout of the year. I hope it was, so I can say, "Yes, I was there."
Before I left Atlantic City, I heard a bunch of cheers.  Martinez was walking through the casino with his people and everyone was cheering.  It was definitely going to be a party for him and his people.  About 10 minutes later, as I was walking out, I ran into them again and as he walked by I congratulated him on his knockout.  I received, a "Thank you," and a big "knockout" smile in return.  If he was a little bit taller, I might have hit the mat also...  He's a good looking man...
Hmmm, that reminds me of Pat Benatar's song, "Hit me with your best shot."  Here you go!
THE WIRK
Posted by THE WIRK at 1:56 PM