Margarito and accusations of cheating ~ Ephedra and Hydroxycut talk

I went out tonight to catch up with a bunch of friends and get their reactions to the Antonio Margarito v Manny Pacquiao fight.  A few of them started talking about Ephedra and Hydroxycut.  That reminded me of the Tweet that I saw before the fight about Margarito (i.e something about not being able to last through 3 anthems and a Nelly concert, even with Ephedra and a pill).  Huh?!!?  Since I was at the fight, this was all news to me.

From what I can piece together, evidently someone in Pacquiao's camp saw something and/or was alerted of something that looked suspicious.  I have no idea what happened pre-fight, with regard to the accusations, but I do know that Freddie Roach watched as Margarito's hands were wrapped.  I know because they showed it on the screen... 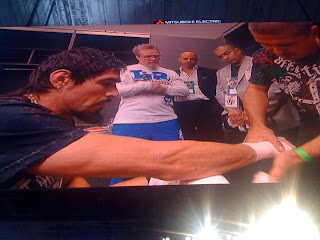 Is it just me, or does it seem like controversy follows the Margarito (i.e. or should I say, Margacheato) camp?  Maybe, it was "Just a Dream" (i.e. insert Nelly reference)...
Here's a pic of Nelly from the screen from the night of the fight.  He was on the opposite side of the floor.  Whoever the genius was, that decided not to raise the small stage, made a mistake. 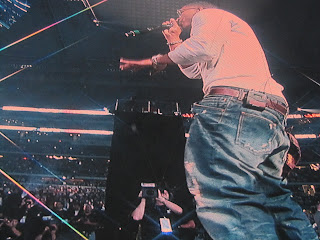 Back to boxing...  Whatever the case may be, Margarito lost by unanimous decision and has a broken orbital bone...  Ouch!
THE WIRK
Posted by THE WIRK at 10:39 PM