In Dallas, I met Freddie Roach ~ Before the Margarito v Pacquiao fight 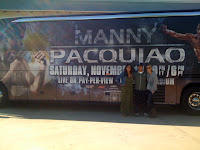 I am in Dallas for the Margarito v Pacquiao fight tonight.  After getting swooped at the airport by family, I mentioned to my cousin that the Gaylord Texan was hosting both the Margarito and the Pacquiao camps.  Therefore, for breakfast/lunch, my cousin and his family took me to the Gaylord.
As soon as we entered the Gaylord, you could see all the Filipino fans taking pictures in front of the Manny Pacqiuao bus.  ****  Only when I left did I notice that there was a Margarito bus parked right next to it.  It's days like this that I wish I spoke or at least understood Tagalog.  I also wish I had some Pacquiao gear, but I think I can rectify that situation tonight. 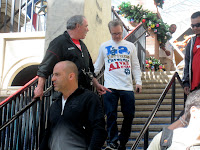 While waiting for a table at the Riverwalk Cantina, I noticed Freddie Roach walking down the steps towards the restaurant.  Yep, that's my life...  Right place at the right time. 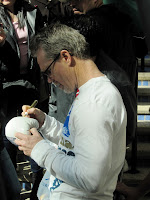 After signing a poster and a glove for a fan, Freddie stopped and I was able to get a picture with him. 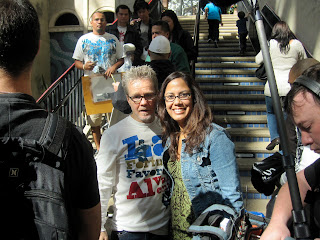 Freddie Roach and I
Later on, during lunch Alex Ariza (i.e. Manny Pacquiao's Strength and Conditioning Coach) came down to the restaurant. 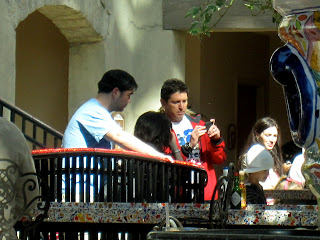 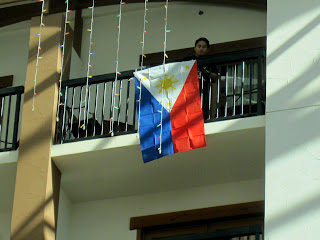 To be honest, the Gaylord Texan seemed to be a place for all the Pacquiao fans to get together.  It was a quiet scene, and even though I saw one Mexican flag, you could tell there were more Pacman supporters "in the house".
It's going to be a good one tonight!

**** Right before the fight, my mom sent me a text. She told me that the flag I posted was a Philippine flag and not a Mexican one. I KNOW THAT. That was my point. But just to clarify, there were more Philippine flags... I only saw one Mexican flag.