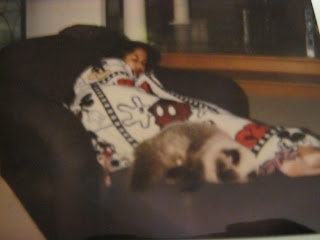 It's been a rough day...  I woke up this morning after having a nightmare that my parents bought the house I used to live in, when I was engaged a million (ok, so it wasn't really a million) years ago.  The house is the one he and I picked out when we were dating.  He actually proposed to me in the backyard on the deck by the water.

The house is also the same house where he and his current wife (i.e. who I used to hang out with and was once engaged to his former teammate) resided once I left town and they coupled up.  But, that's all neither here nor there for the purposes of this blog...

Needless to say, I was bothered by the nightmare.  I woke up angry.  Later in the day, I decided to Google my old address and wouldn't you know that house is for sale?  Actually, it was listed 10 days ago!  Scary coincidence...

I've always been someone who can sense when there's a problem or when something is happening.  I get a feeling about people and things and most of the time I'm right.  Obviously, I'm not batting a thousand or I'd be wealthier and more successful in my professional and personal relationships ~ but I've learned not to ignore my gut feelings.

The owner of the house has always said that Cleveland will always be "home".  He was drafted by the Cleveland Cavaliers in 1996 (i.e. 1st round, 20th pick).  Based on the effort to sell this house, all signs point to that not being the case.  I can't speculate on what I don't know, so I'm not going to say for sure that he hasn't purchased another home in Ohio.  I don't really care.  Obviously this won't garner as much attention as LeBron's decision to leave Cleveland, but for someone like me, I have to say I'm a bit surprised.

I looked through the pictures on the house listing and am surprised to see so few changes in the house that I once called "home".  Of course, the woman that "replaced" me tried to renovate it and make it hers (e.g, redoing the kitchen, expanding the terrible closet space), but at the end of the day ~ that's still the house that he and I picked out for our life together and the house that she moved into AFTER I left.

Admittedly, I wanted the house in Gates Mills, but he always wanted to live on the water.  ****  I conceded since he was only my boyfriend at the time and life was hard enough with him injured and on crutches.  When we were house-hunting it was my job to climb stairs or descend downstairs to check ceiling heights to make sure that a 7 footer could stand upright without hitting his head.

That reminds me.  One of the coolest basements I'd ever seen was John Hart's.  He's the former General Manager of the Cleveland Indians and Texas Rangers.  Damnit, ironically I just read his wikipedia page and it says that he currently serves as senior adviser, baseball operations, for the Rangers. Ugh, I was just in Texas for the World Series!!!!  Anyway, John Hart had one of the best collections of baseball memorabilia I'd ever seen.  Baseball posters, stadium seats, signed baseballs and bats. It was awesome.  I remember walking down there and calling up the stairs to my guy, "You really need to come down here!" and watching him precariously negotiate the stairs and low-ceilings on his crutches.

It's not uncommon for athletes to sell or rent their homes to other athletes.  Free agency, trades, seasonal work, and retirement are part of the business of sports.  I watched MTV Cribs before and saw Shaquille O'Neal's Miami house.  It used to be Rony Seikaly's and Shaq put his Superman touches on it.  I remember Shaq and Shaunie remarking that it was nice to move into Rony's house because things were built/customized for a taller man (e.g. door heights).

Here's one for you...  In the master bathroom the sinks were higher than your average sinks, to make it easier for him to wash his hands.  Um, that's fantastic.  What about people who have normal heights?  Do you know how gross and annoying it is to have water drip down your arm onto your sleeves?  I wonder if the toilet in the master bathroom of my old house is still raised.  It was elevated to the point that Danny Ferry once gave me a "step stool" as a joke for Christmas, since he was concerned my feet would dangle.  I never used it, but I still have the stool.

When a veteran Cleveland Cavalier moved out of his home after being traded, Damon Jones a "new Cleveland Cavalier" (i.e. at the time) moved right in.  That house was featured on an episode of MTV Cribs.  Seriously?!?!  I've been in that house many times (i.e. numerous parties, dinners, and random nights).  It's not that extraordinary.  I can't find the episode anymore. I can only find the unaired clip.  See for yourself with the following link.  Never Been Seen: Damon Jones: "Damon Jones lets us look behind his fully stocked bar, and gives us a spin in the chair in his private barber salon."

When I get around to it, I might post some pics of the house from back in the day or I might not, since it doesn't really matter.  I'm debating on whether or not I even want to post a link the listing, and at this time I'm deciding against it. I don't need/want my former address published.