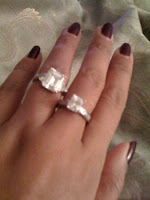 Word is getting out that Tony Parker and Eva Longoria are getting divorced.  To be fair, there's also a conflicting report from Longoria's camp, that the rumor is false.  Who knows.  Usually, where there's smoke there's fire.  I don't know the specifics of their relationship.  All I can think is, "Hmmm, another NBA failed marriage... " ****  Earlier this week, Steve Nash announced that he was getting a divorce.

Do you know what it's like to see your ex on TV when you're on a date?  Do you know how it feels when you're on a date and you're new love interest starts berating or championing your ex's skills on the court?  Do you know what it's like to be haunted by the voice and sight of a 7 foot ghost from your past?  I do, and it's awesome (i.e. that's sarcasm, people)...  Another thing I do know is that life goes on, and it all gets BETTER.

I'm not going to speculate as to why these relationships failed.  I just wish everyone the best as they rebuild and move onto their new lives.  ****  Word of advice, if you're ever in this situation.  Keep the ring.  Trust me.  He doesn't need it.

I wonder if NBA divorces come in 3s (i.e. like celebrity deaths).  Wives in the NBA, you might want to keep an eye on your man...  Just saying.

If you want the TMZ story, here you go: http://www.tmz.com/2010/11/16/eva-longoria-divorce-tony-parker-san-antonio-spurs-desperate-housewives-split-breakup-divorcing-filed/

Update: Well it seems like the rumor may not be true.  Personally, I don't care either way.  Like I said, I wish every married, NBA couple the best.  OK, maybe not EVERY married, NBA couple (i.e. let's be real).  Regardless of whether or not Tony and Eva are divorcing isn't that relevant, since the sentiment of the post is still valid.