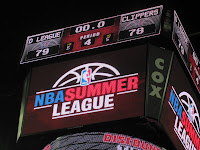 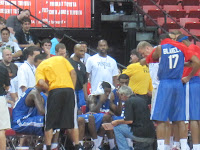 Just like in Las Vegas, Baron Davis, won't be playing tomorrow night.  However, there are at least two key differences.  For one, the competition for the Clippers will be the Minnesota Timberwolves.  The Timberwolves' Michael Beasley and Kevin Love have been playing TOUGH.  ****  If you haven't heard about Beasley's scoring (42 one night, followed by 35 the next) and Love's 31-31 performance, then you're not a true basketball sports fan.
Another difference is that Blake Griffin will be playing, and I'm curious to see him on the court.  It's his rookie season, and I plan to take advantage of the game tomorrow in Minneapolis to see if anything special happens.  Hopefully, the folks at the Target Center are treated to a show.  Personally, I'm tired of missing the Timberwolves highlights and having to watch them on TV. 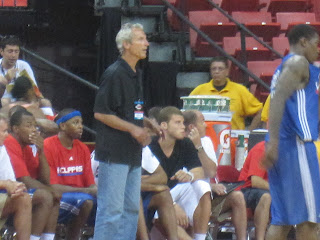 No street clothes for Blake Griffin tomorrow
The "good" news is that tickets for Timberwolves' games aren't that difficult to get.  I just did a Stubhub search and Row 1 on the sidelines is $140. Face value is $200.  Therefore, I'd be willing to bet I can get a scalper to sell it to me for less than $100.  Now that I think about it, I might be able to get a free one...  Regardless, I'm not too concerned about where my seat is for the game.  I looked at the Ticketmaster seating chart of available seats and it looks like the 11th hour of a game of Battleship with my brother (i.e. plenty of seats available).  ****  Yes, I used to cheat and move my ships.  I could do that because I tracked his hits and misses.  Whatever.  We were young.
THE WIRK
Posted by THE WIRK at 10:07 PM