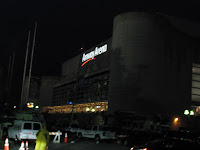 The battle of Florida was tonight, and the Orlando Magic beat the Miami Heat by a score of 104-95 at the Amway Center.
****  I still need to make it to that new Amway Center.  I went to the old Amway Center when the Cleveland Cavaliers were playing against the Orlando Heat for the Eastern Conference Championship.  I was at Game 4 and the Cleveland Cavaliers lost a heartbreaker, with a score of 116-114.  It would take 6 games, and ultimately the Cavs would lose the series.  The pictures for this post are from that trip. 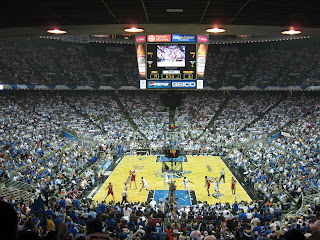 View from the concourse of the old Amway Center
I just checked Covers.com and unless I'm reading it wrong, the money line was Orlando -165.  Hmmm, Vegas must realize that the gen pop (i.e. general population) is losing faith in the Me-A-Me Heat.  Whatever. 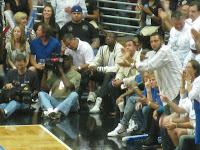 Unlike the Game 6 in Orlando that I watched, Dwyane Wade wasn't sitting as a spectator courtside.  He played tonight for the Miami Heat, and tallied 18 points in 40 minutes of action.  ****  I will admit I like Dwyane Wade, but it's so dificult to root for him with LeBron and Chris Bosh as the balance for the trio.
I didn't get to watch the whole game, but I did watch the last 4 minutes.  I checked the box score and it looks like both teams had balanced scoring.  Who really cares, though.  At the end of the day ~ the Miami Heat lose, another Angel gets his/her wings, and I go to sleep happy.
Miami is now 8-7 after dropping three games in a row!
In honor of the Orlando Magic defeating the Miami Heat tonight, and the fact that it was snowing in Minneapolis this afternoon (i.e. the song mentions "summer") how about we listen to a little music?
Here's "Magic" by The Cars.

This can't be good for Erik Spoelstra...