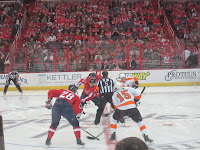 Today the Philadelphia Flyers were in town to take on the Washington Capitals at the Verizon Center, and guess who was sitting pretty 2 rows behind the Caps bench...  Yep, this girl.  My friend (i.e. who my brother and I have known since we were maybe 6 years old and moved to the DC area about a year ago), Scott, told me (i.e. and another childhood friend who was in town) at dinner last night, that he had never been to a Caps game before.  I couldn't believe it.  It's been about a year since he moved to the DC area and he hadn't seen the Caps in action?!?!  Well, that's just unacceptable, so I took it upon myself to rectify the situation.
Before the game, I told him that I thought the final score would be 3-2, and that the Caps would win.  YES, I was right.  Don't believe me?  Why would I lie?!?!  I told you I was somewhat psychic... 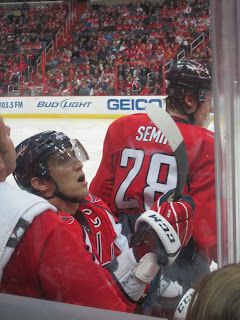 I decided that for this game, I wanted to sit at center ice near the Capitals bench.  Normally I like to sit towards the side that the Caps shoot twice, but since this was my first game of the season I just wanted to focus on taking some good shots of the players.  Plus, since it was my friend's first time at the game, I wanted to make sure he got a good look at Alexander Ovechkin.  Ovechkin was relatively quiet during the game, but I managed to get some great shots. 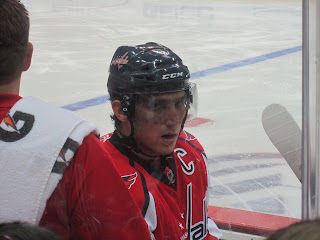 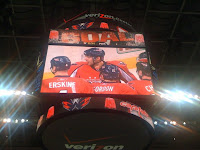 Eric Fehr scord a goal in the 1st period to tie the game at 1.  It was Fehr's third goal for the season. 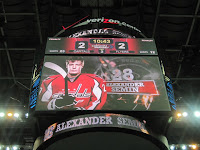 Alexander Semin scored in the 2nd period to tie the game at 2. 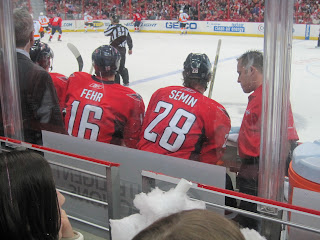 Fehr and Semin sitting on the bench, taking a breather. 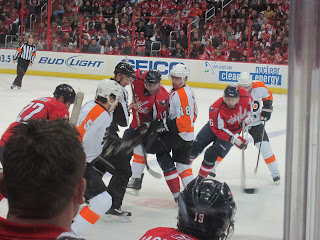 Up close, near the action 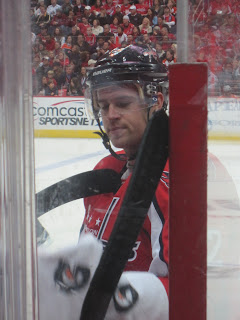 Sure enough, Mike Green came to the rescue in overtime and scored to give the Caps the win.
My first hockey game for the season is now "in the books".  The Caps now have a record of 10-4, and continue to lead the Southeast Division.  GO CAPS!!!!
THE WIRK
Posted by THE WIRK at 11:19 PM