Heat are getting worked by the Celtics, and no one in Miami cares

The past 2 weeks, as soon as I land, the first person I've seen on TV is my ex... Thank you, ESPN (i.e. sarcasm)...  I'm loving the fact that the it's the 3rd quarter and the Boston Celtics are beating the Miami Heat.  There are so many empty seats in the American Airlines Arena.  Told you all the bandwagon jumpers would jump off, just as quickly as they jumped on.

The only time Heat fans will support the team is in the finals.  I know.  I was there for Game 5, in 2006, when they were up against the Dallas Mavericks.  Miami won that game (i.e. with a score of 101-100) and eventually went on to win the NBA Championship after winning Game 6.  That season Shaquille O'Neal and Dwyane Wade were both members of the Miami Heat, and Riley was still coaching.

Here are a few pictures I took at the game. 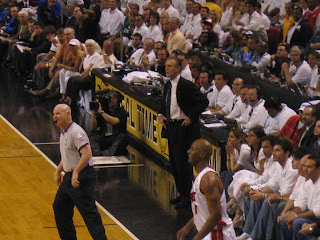 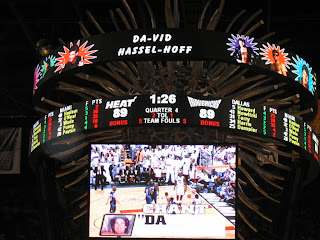 With Dirk Nowitzki at the line,
the crowd chants DA-VID HASSEL-HOFF 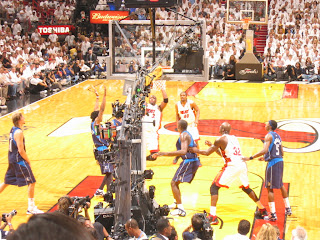 Dwyane Wade with a dunk. 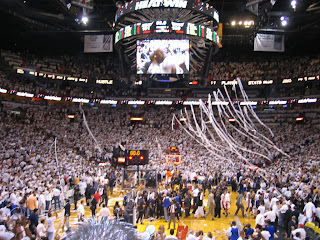 Game over
Based on LeBron's strong performance, I wonder if he is going to use his "I can't do it all by myself," speech (ala Cleveland) in the post-game press conference when the Heat lose...

Anyone remember these quotes from Jeff Van Gundy?

"They will break the single-season win record [of 72],” Jeff Van Gundy said. And I think they have a legit shot at the Lakers’ 33-game [winning] streak [in 1971-72], as well. And only the Lakers have even a remote shot at beating them in a playoff series. They will never lose two games in a row this year."