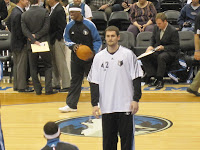 Ugh.  The Knicks came to Minneapolis yesterday, and I debated on staying in town to catch up with an old friend...  I debated, and then I decided against it.  I told my friend that I'd see him next time.  ****  I had too many things on my mind to overly concern myself with tonight's New York Knicks v Minnessota Timberwolves game.  The picture is from the game I attended last season.

My friend texted me, "As Apollo Creed said to Rocky: Ain't gonna be a next time."  I laughed, because I know I'll see him again eventually so I'm not overly concerned.  PLUS, I guess I'm Rocky in that text exchange, so I'm good with it.

Well, needless to say I missed a great performance by Kevin Love.  Based on the score and the tweets it didn't look like there was a lot of defense being played.  However, Love's 31-point and 31-rebound night deserves a post.

A few months ago I watched an episode of Entourage and I noticed that Kevin Love was doing a cameo.  Of course, he played himself.  I knocked the scene, and thought that the casting folks on the show must be hard up for talent.  I take it back, Kevin.  Tonight, you were a star.  Well deserved!

The Knicks had balanced scoring (i.e. starting five all had double digits) but it wasn't enough.  The Timberwolves defeated the Knicks with a score of 112-103.  Michael Beasley came up big again in this game, but he only had 35 points this time around.

Wowsers...  I guess I should've stayed a couple of extra nights in Minneapolis, after all.  I need to get to a game...