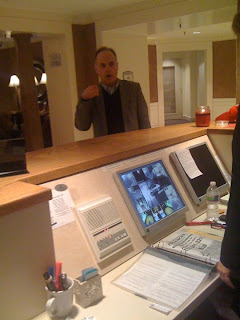 So last week, I came home close to 9:30PM to find some random man in my building's lobby who was talking to the concierge.  I went past him and went straight to the mailboxes and sure enough he was over by the mailboxes "just looking" at them.  He went by me and then saw mailbox I was pulling my mail from and 2 minutes later, he knocked on my door.

Since I just saw the man and he looked relatively non-threatening, I opened my door.  He flashed my a green badge with no agency seal, no name, and only his picture.  He said his name was Richard Butler" and that he worked for the US Census Bureau.  He asked me about my neighbor(s) across the hall and whether or not I'd seen them.  I said, "No," and shut the door.

Immediately I felt like something wasn't right so I called someone to sound off.  I wanted another opinion as to whether or not that situation was strange.  After having my feelings validated I went down to the lobby to talk to the concierge and explain what just had happened.  Sure enough, she was taking notes and recording the incident with the man, because she thought he was suspicious also.

We called the police.  While waiting for the police, the man came back down and then saw me behind the desk.  I asked him to show me his badge again and he said, "Yes," but then never produced it and instead tried to enter the office where the lady and I were standing.  Immediately, I panicked and went to close the door ~ but the door was stopped and wouldn't close.  I retreated and was ready to hurdle the desk as the lady stood between the man and me.

He said he couldn't show me his badge because of Title 13.  Title 13 is the law under which the Census Bureau operates. The law guarantees the confidentiality of census information, and establishes penalties for disclosing this information.  Seems to me that the man is just spinning a story, because to me ~ Title 13 doesn't mean that he doesn't have to show his badge to people he encounters, when he's on official business.

When the police came, the man decided to talk to them outside.  I have no what story the man gave them,  but somehow he was able to prove to them that he worked for the US Census Bureau.  I guarantee, if he was able to do that it wasn't by showing them the same bogus badge that he showed me.  The whole experience was suspicious.

I told the police my story and they said that since he worked for the US Census Bureau he was allowed to be in the building and wasn't trespassing.  The police told me that he didn't have to show me his badge.  Just because a man works for the IRS, doesn't mean he can go door-to-door collecting taxes and I'd be willing to bet a lot of money that even if he does work for the US Census Bureau that he's abusing his power and acting inappropriately.  I find it incredibly hard to believe that coincidentally he was looking for my neighbor across the hall, after he saw me check my mail.

My sounding board told me to take a picture of the man, and that was the best idea he had.  The man claiming to be a US Census Bureau worker is pictured at the beginning of this post.  All I can say, is that if you see this guy ~ don't answer your door, and if I cross paths with him again, I'm still going to call the police.

According to the following website:
If someone shows up at your home claiming to be from the Census Bureau, check for these indicators.

• Census employees will carry a bag marked with the Census logo.
• They wear a specific badge with the employee’s name, and if they’re driving, they will have a placard in their car.
• They will be able to supply more identification if you ask.
• You can verify their identity by calling the Census Bureau at 1-866-226-2864. You will need to provide the worker’s name and the Case ID number.

Needless to say, the man couldn't not provide any of the following information.

****  Update:  After talking to the local census bureau, it turns out the man is legitimate.  They asked him for a copy of his badge to see what he's carrying and had a talk with him about the experience and following proper  procedures.  The lady from the office in Charlotte, NC said she called me back and left me a message.  Funny.  I never received a voicemail from her.  Great.  Now I  wonder if I'm getting all my messages...