In Dallas for the World Series, but never made it into Rangers Ballpark ~ Rangers rally today

I went to Dallas for the World Series, but I never made it to the game.

****  Incidentally, last year I was working in London and on vacation in Rome for Halloween weekend.  I visited the Roman Colosseum and many other sites during that weekend, but being the sportsfan that I am, I have to say that the Colosseum was definitely my favorite destination on the trip. 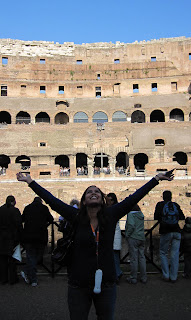 OK.  Enough about that.  Back to Dallas...  I was planning on going to Game 3 on Saturday (i.e. and looked forward to seeing my friend from school, who was also in town with his kids).  Game 3 was the first home game for the Texas Rangers and they were 0-2 after losing both away games to the San Francisco Giants at AT&T Park.  Prior to arriving in Dallas, I did what I always do.  I called a couple of my contacts and began hawking ticketing sites.  I looked on Stubhub.com on Friday and I was ready to pull the trigger, but I hesitated.  In addition to going to Dallas for the World Series, I was there because I wanted to get to know someone better and wanted to spend time with that person.  Therefore, when it came to the game I hesitated.

I never hesitate.  Correction:  I've hesitated one time before, and I have never forgiven myself.   Til this day, I still remember forgoing a concert for a birthday party, and til this day I want to kick myself.  I can't lie, those feeling are creeping into my brain again, and I'm beginning to turn sour.

If it were me, JUST ME, I would've had a ticket in hand on my way to the ballpark.  I had the money I won in Vegas earmarked as the funds for the the ticket to the game.  If it were just me, I would've been prepared.

It wasn't JUST ME, this time and I was accommodating someone else in my plans.  When we walked around the park it was clear that there weren't many people selling.  The fans of the Texas Rangers were obviously excited since the team was in the World Series for the first time EVER.  Yet another reason to go to the game since it would be so compelling for the fans.

Before going to the game, while sporting my presents, a new Rangers T-shirt and a new Rangers hat, my new person of interest and I had a quick bite a Charlie Palmer at the Joule.  The lobster corn dogs and beef skewers were my favorite.  I must disclose that the sauce for the beef skewers was a bit salty though.

After our meal, we headed towards Rangers Ballpark to scope out the scene.  Around the stadium there were various scalpers, but their inventory was scant, undesirable, or even fraudulent.  There were a few guys that purchased fake tickets that wouldn't scan or were printed out numerous times so that the bar codes were no longer any good.  There were only about 3 pairs of upper level seats that were up for grabs and the going price was $500/ticket.  Standing room only tickets were also up for grabs, but there weren't many (i.e. less than 10 were being offered by the scalpers outside).  SRO tickets were going for $400-$500 also.  ****  There was a Goldentickets.com bus parked near the stadium, but I never checked their inventory.  I've used them before though, and I've been satisfied with their service.

Saturday was a beautiful night for a baseball game.  We saw the fireworks light up the sky when the Rangers hit a home run.  There were plenty of people tailgating for the game and enjoying the game from the nearby parking lots.  They'd set up the power cords and had the game on TVs for other fans to watch and enjoy.  Guys on rickshaws were transporting people from the lots to Rangers Ballpark and charging a minimum of $10.  Have you ever ridden one?  They can be fun and the guys get a good work out as they pedal you to the park.

After giving up on getting a ticket into the game, we headed off to dinner at the Dallas Chop House.  If you haven't been to the restaurant yet (i.e. it's about 8 months old), I recommend that you check it out.  The food was fantastic.  For appetizers, we enjoyed a lump crab cake and an avocado, ahi tuna, and cucumber appetizer  and a dry aged sirloin for my main course.  I think it was a sirloin, but I could be wrong.  Whatever the cut of meat was, it was very tender and juicy...  In addition to the food, the restaurant's design is appealing.  The outdoor bar and seating area at the Dallas Chop House had an outdoor fireplace that was very sexy and offered warmth when temperatures started to fall at night.

My Saturday night in Dallas didn't go as expected, but great food and company helped ease the disappointment.  This blog started with the NFL Playoffs and covered my adventures at the Super Bowl, NBA All-Star Game, The Masters, NBA Finals, and most recently covered my run during the the MLB Playoffs...  Wouldn't you know, Game 3 was the ONLY game the Rangers won in the World Series, and I missed it...  Ain't that a kick in the head?!!?!?

Looks like I exhausted all my luck during the New York Yankees v Texas Rangers ALCS series, when I happened to have the best seat in the house next to someone special... C'est la vie :-P

I received an email today about the Texas Rangers rally that will be held today Wednesday, November 3 at 6:00 p.m. in Lot J on the west side of Rangers Ballpark in Arlington.  The rally will feature President Nolan Ryan, Manager Ron Washington, and a number of the players from the 2010 American League Champions.  The Rangers Rally is free and open for all fans. Free parking is available in Rangers MetroPCS Lot A, Academy Sports + Outdoors Lot B, Lots C, M, and N and Cowboys Stadium Lot 4 beginning at 2:00 p.m. Fans should note that Nolan Ryan Expressway between Road to Six Flags and Randol Mill Road will be closed today beginning at 8:00 a.m.